Constitution Hall, 1978, after the fire 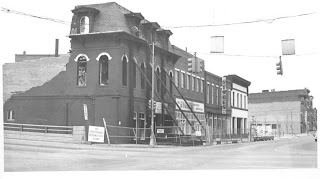 Posted by Diane Rabson at 8:04 PM No comments:

Sam and I photographed 15 streetcorners today on Blake St. The most poignant was the absence of Constitution Hall, an 1866 building that began as a bank. The building was the site of the signing of the State Constitution in 1875-76. Sadly, although on the National Register of Historic Places, the building was torched in 1977. The facade remained when I photographed in 1978, propped up by buttresses.

We're using a Canon EOS camera which is very different from the one I used in '78--a Kodak Retina Reflex. The 50 mm lens worked perfectly to reproduce the views from '37.

The Canon, even at 50 mm, picks up a lot of foreground. We still have parallax, of course, which is more problematic with the plethora of tall buildings in downtown.

Another issue is light and shadow. Very easy to get good shots when you're photographing across parking lots, thanks to Denver Urban Renewal Authority. Now the buildings block the sun so there's a lot of contrast between sides of streets. That's why today's cloudiness was really great.

Should we depart from the tight rephotography or allow the Canon to do its thing? We'll get different looking views, but more information about the streets...
Posted by Diane Rabson at 4:21 PM No comments:

Labels: Light and shadow in Denver

Today was a wonderfully cloudy day in Denver and Boulder; a few raindrops and some spectacular clouds visible north of the D&F Tower. I photographed the following:

1) 878 (Wynkoop railroad bridge, now a walking bridge). When I photographed this in 1978, I stood on the concrete bank of Cherry Creek. Now of course that's impossible unless I or Sam climbs over a fence. Hopefully the view is going to be good.

2) 951 - Market, across the street from the bus station. The old Metropolitan Hotel used to stand at the corner, its doorway facing the street diagonally. That's where Neal Cassady lived with his alcoholic father for a time in the 30's.

4) 993 - South on Lawrence, East on 14th (looking at Park Central, and I believe, the old Central Bank. Torn down. Was a nice building. What's wrong with Denver?

5) 020 - South on Curtis, West on 14th, looking toward the Auditorium and the DCPA. Still a lot of construction on 14th.

6) 019 - South on Curtis, West on 15th. Tough vertical, looking down toward the Mountain States Telephone and Telegraph Building (that building with the beautiful Allan True murals). Nice light on that building. I shot the scene in wide angle; film ran out before I could repeat in 50 mm.

I have tried to think of my favorite buildings downtown, extinct or alive for now.

1) Old Public Service building with the lights that are turned on at Christmas. (15th and Champa) This building, unfortunately, is not in our project area.
2) Park Central. Not that I like the architecture, but emotionally this building was very important to me in the late 70's. The Rio Grande Railroad had offices there and I applied for a job as a locomotive fireman in Denver. Was turned down; I was devastated! Then I got the same job in Pueblo; go figure.
3) The Ghost Building. Somewhere on 15th. I have a picture of the facade. I've heard the stones were saved so the building might rise again. Good luck.
4) The Equitable Building.
5) The Republic Building, torn down.
6) Not in downtown, but the old Temple Emanuel, 16th and Pearl. Sam lives behind this building. We're members of the current Temple, located at 1st and Grape, but for the 25th anniversary, the congregation held a big festive evening at the old Temple. I sang in the choir that night.
7) The Denver Theatre, on the other side of 16th from the Paramount. A lovely movie palace, complete with ushers in 1977! I saw "Five Easy Pieces" there in that year with my roommate.
8) The current Xcel Energy building is interesting and quite attractive.
9) The Mountain States Telephone and Telegraph Building, Curtis and 14th.

Tomorrow morning, Sam and I meet at Curtis and 14th to resume photographing!
Posted by Diane Rabson at 3:56 PM No comments:

Stopping at Daz Bog coffee near the Granite Building and in the hotel helps keep up the momentum. Also, Tattered Cover before the trip back to Boulder.
Posted by Diane Rabson at 12:10 PM No comments:

Moving forward on the project

Have been photographing a lot in Denver, although dealing with sunlight and shadow. We may have to redo some of the views. Currently trying to cover all of Lawrence St., 14th to 19th. Saw a really interesting show on the local Comcast netw0rk last night about the D&F tower. Will look for views of the tower with the department store "wings," torn down in the 1950's.

We've done 90 photographs. Wynkoop and Wazee were fun; Lawrence and Arapahoe and Curtis more challenging since there are no landmarks to hang your hat on from the 30's and sometimes few from the 70's. The parking lots of the 70's are mostly filled in, it seems, sometimes with parking garages! I'm glad I waited till now to do the project since the contrast with 33 years ago is quite profound. There's been a lot of buildout.

Next time to photograph: Sunday, 3/6. Supposed to be warmer in Denver and partly cloudy (hah).
Posted by Diane Rabson at 12:00 PM No comments:

I've been doing more photography on the project, but only on the days when the temperature is above 45 degrees! Call me a wimp, but my hands get cold and I start to lose momentum. Yesterday covered 18 corners on 18th and 19th streets, Market to Wynkoop.

Must find out who owns the Barteldes building and that strange second floor door that goes nowhere (but once went to the viaduct.) The viaduct is gone, and I have no vantage point for one of my photos that I took from the viaduct. Also noticed that the Tattered Cover building has one of those doors that also would have opened onto the viaduct. (across the street).
Posted by Diane Rabson at 12:46 PM No comments: